This page is about the OpenSSH ssh command on Unix/Linux or the Mac terminal. For general information about SSH and other implementations, see the SSH protocol home page. 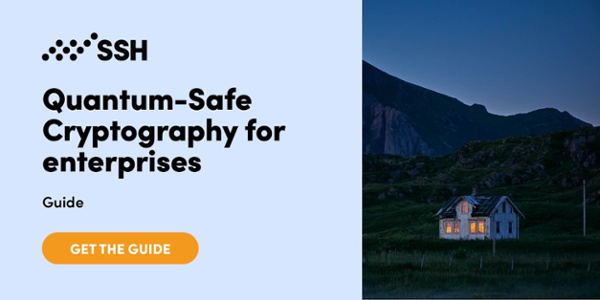 The ssh command provides a secure encrypted connection between two hosts over an insecure network. This connection can also be used for terminal access, file transfers, and for tunneling other applications. Graphical X11 applications can also be run securely over SSH from a remote location.

There are other SSH commands besides the client ssh. Each has its own page.

Linux typically uses the OpenSSH client. The ssh command to log into a remote machine is very simple. To log in to a remote computer called sample.ssh.com, type the following command at a shell prompt:

If this is the first time you use ssh to connect to this remote machine, you will see a message like:

Type yes to continue. This will add the server to your list of known hosts (~/.ssh/known_hosts) as seen in the following message:

Each server has a host key, and the above question related to verifying and saving the host key, so that next time you connect to the server, it can verify that it actually is the same server.

Once the server connection has been established, the user is authenticated. Typically, it asks for a password. For some servers, you may be required to type in a one-time password generated by a special hardware token.

Once authentication has been accepted, you will be at the shell prompt for the remote machine.

It is also possible to use a different username at the remote machine by entering the command as:

The above can also be expressed with the syntax:

Executing remote commands on the server

The ssh command is often also used to remotely execute commands on the remote machine without logging in to a shell prompt. The syntax for this is:

For example, to execute the command:

on host sample.ssh.com, type the following command at a shell prompt:

After authenticating to the remote server, the contents of the remote directory will be displayed, and you will return to your local shell prompt. -x Disables X11 forwarding.

To configure passwordless public key authentication, you may want to create an SSH key and set up an authorized_keys file. See the pages on ssh-keygen and ssh-copy-id for more information.

Command-line options can be used to set up port forwarding. Local fowarding means that a local port (at the client computer) is tunneled to an IP address and port from the server. Remote forwarding means that a remote port (at the server computer) is forwarded to a given IP address and port from the client machine. See the page on configuring port forwarding on how to configure them.

Some of the most important command-line options for the OpenSSH client are:

-1 Use protocol version 1 only.

-2 Use protocol version 2 only.

-4 Use IPv4 addresses only.

-6 Use IPv6 addresses only.

-A Enable forwarding of the authentication agent connection.

-a Disable forwarding of the authentication agent connection.

-c cipher_spec Selects the cipher specification for encrypting the session.

-D [bind_address:]port Dynamic application-level port forwarding. This allocates a socket to listen to port on the local side. When a connection is made to this port, the connection is forwarded over the secure channel, and the application protocol is then used to determine where to connect to from the remote machine.

-i identity_file A file from which the identity key (private key) for public key authentication is read.

-J [user@]host[:port] Connect to the target host by first making a ssh connection to the pjump host[(/iam/jump-host) and then establishing a TCP forwarding to the ultimate destination from there.

-l login_name Specifies the user to log in as on the remote machine.

-p port Port to connect to on the remote host.

SSH replaced several older commands and protocols in Unix and Linux the 1990s. The include telnet, rlogin, and rsh.

SSH runs at TCP/IP port 22. This is right between ftp and telnet, which are 20 years older. Read the story of how SSH got port 22.

The following video summarizes how and why SSH was originally developed.