What Is the Internet of Things? IoT Security and Risks IoT Breach Examples What Can the Society Tolerate? How Will the Society Solve It? Minimum Acceptable Level of Security How Does a Typical IoT Attack Work? How Does the Attack Penetrate a Device? Back-End Servers in the Cloud Field Service Access Medical Device Security Research Tool to Find Vulnerable Connected Things

What Is the Internet of Things?

IoT (Internet of Things) refers to devices that are connected to the Internet. It is a very varied field, with the devices ranging from lightbulbs and switches to cameras, printers, cars, and heavy industrial machinery. The number of such devices is expected to grow to tens of billions in a few years. It is also related to digitalization, which is one of the megatrends driving higher productivity in the industry.

Many connected devices are sold to consumers and used at home. Others are used in offices. Yet others are used in the industry or logistics. Smart cities and smart power grids are bringing the degree of connectedness to a whole new level.

Security is a major limiting factor for IoT. There will be a staggering number of such devices, and some of them perform functions that can cause loss of life or disrupt important functions of the society.

Many of the first-generation devices have default passwords that are shared by all devices. Many contain design flaws that allow attackers to take full control of the devices. We have seen several attacks where the number of IoT devices taken under control has been in the millions.

A major security concern arises from the sheer number of the devices. They can be programmed to send traffic to a particular destination. When millions of devices do the same simultaneously, even the best connected sites in the world become so congested they can no longer operate. This is called a Distributed Denial-of-Service Attack, or DDoS.

Many connected devices also come with cameras and microphones. They have already been used by both criminals and intelligence agencies to snoop on individuals. Smart TVs are particularly lucrative for this, as they are often centrally placed in apartments, many come with microphones and cameras, and a recent study found that 85% of current smart TVs could be hacked over the TV broadcast channel. The CIA (US Central Intelligence Agency) has been reported to already have used Smart TVs for espionage.

Some examples of recent IoT breaches include:

Every day, companies and services are faced with DDoS attacks of unprecedented magnitude. It is only going to get worse as devices from toothbrushes to toasters to fridges to televisions become widely sold and exploited.

What Can the Society Tolerate?

People will eventually be injured and die as a result of IoT attacks. Cars will drive off the road; millions might watch their houses freeze while heating contractors are flooded with bogus calls; and emergency calls won't go through to get an ambulance to a heart attack or car crash victim.

In many cases, the connected devices are very badly designed from a security viewpoint. Manufacturers make design choices that are known to make the devices vulnerable. Attackers may render the devices vulnerable, may use them to conduct illegal activity (including drug dealing and terrorism) making the traffic look like it comes from ordinary people's homes, and may cause life-threatening harm to the society. It is not a theoretical posibility; it is happening all the time.

Eventually the society will not take it any more.

How Will the Society Solve It?

There are several ways the society might approach the problem.

One very possible approach will be defining a minimum acceptable level of security for consumer IoT devices. The requirement could be driven by legal liability, insurance, or regulation. Products that meet the acceptable level would be safer from liability claims than those that blatantly disregard basic security controls and sell products that can be reasonably expected to cause unnecessary serious harm to others.

The minimum standard would likely to be a moving target, with the bar rising as new vulnerabilities are found and the worst ones have been addressed.

Key elements of the minimum acceptable security controls would include:

How Does a Typical IoT Attack Work?

In a typical attack, the attacker gains control of an Internet-connected device using any of several means. Once the device is under control, the attacker installs additional software on the device. The device is then enlisted to perform further attacks or is used for the attacker's purposes.

Often the whole process is automated, and hacked devices are used to attack other devices. The devices often take commands from one or more command-and-control centers, which are typically just other devices on the Internet.

Sometimes access to thousands of hacked devices is sold for nefarious purposes. Such collections of devices are often called botnets.

How Does the Attack Penetrate a Device?

In principle, any cyberattack can be used to penetrate a device. Some of the most common are:

Back-End Servers in the Cloud

Many IoT devices also connect to back-end systems, such as cloud servers. Some devices are paired with mobile phones, so that they can be controlled remotely. These techniques require the use of secure cryptographic protocols to be secure. They must be properly designed. They also require managing cryptographic keys and trusted certification authorities.

There are also many privacy issues involving data sent to such back-end systems. The data often carries a wealth of sensitive information related to location, activity, health, presence, and capacity of individuals, groups, and employees, in both public and private facilities. It may also be subject to regulations such as HIPAA or EU GDPR (General Data Protection Regulation).

In many heavier Internet-connected devices, the manufacturer wants to collect data about the device's operation for preventative maintenance, licensing, and service operations. Often, the customer's field service organization logs into the device. Sometimes these devices cost many millions of dollars and can cause substantial damage if a malicious party gains control. Examples include paper mills, mining machinery, and harbor cranes.

Generally, security for high-end devices is driven by the cost of process failures, local physical damage that the devices could cause, environmental impact that malfunctions could have, or immediate risk to human life.

Shodan is a service for finding IoT devices on the Internet. It is targeted for researchers, but can be used for all sorts of purposes from market research to finding vulnerable devices to target in attacks. It now also has a feature for finding cameras known to be vulnerable. 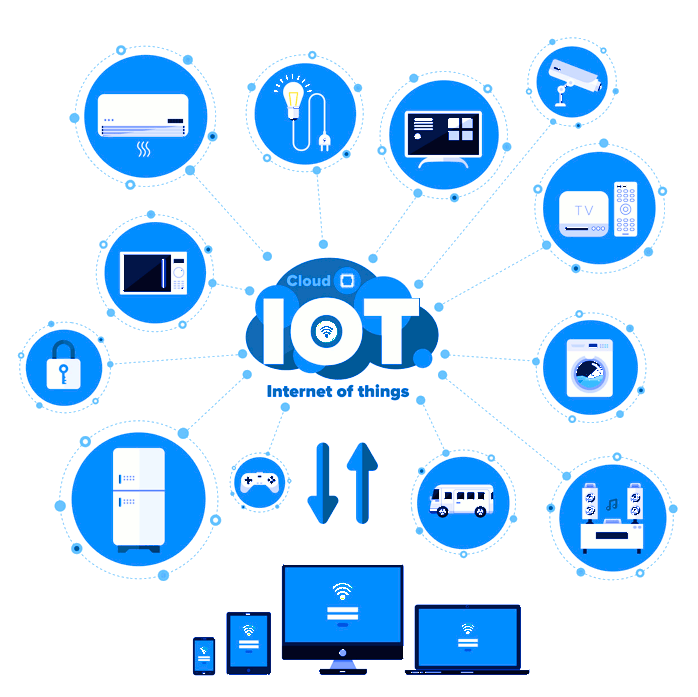