Secure Shell (SSH) access is everywhere within your IT environment. It is the de-facto method for Linux, database & network admins and application support teams to securely connect to servers and applications within them - whether they are on-premise or in the cloud.

Just like passwords, SSH keys are an access credential in the SSH protocol. What's more, 80% of SSH connections are used for automated tasks and over the decades, the number of encryption keys in IT environments has skyrocketed.

SSH Keys pose a risk - but are often forgotten

SSH keys are credentials, just like passwords, as they provide access to privileged systems and accounts that if compromised can lead to unauthorised access, bypassing security systems & maliciously traversing IT systems unchallenged.

Just like passwords, SSH keys are an IT audit failure point and their ungoverned use is against multiple regulations.

Many organisations have put considerable effort into ensuring that passwords are rigidly governed and brought under control, yet the management of SSH keys is often overlooked.

The sobering news is that even if a large organization has all their privileged passwords under control, if their keys remain ungoverned, in the worst case scenario, they have only 10% of their access credentials managed.

Based on our experience, SSH keys are often 10 more common access credentials than passwords in IT environments.

SSH keys accumulate over the years and must be managed

Large enterprises typically need to provision and control tens of thousands of SSH connections across their server estate on a monthly basis. This is because SSH encryption keys do not expire by default and are rather easy to create to complete a specific task by anyone with rudimentary IT skills.

Since IT personnel can self-provision SSH keys, their use is also de-centralized. Most business lack a centralized view and the capacity to manage keys in a systematic fashion for this very reason.

Over decades, the key numbers in IT environments skyrocket.

Enterprises without a proper SSH key management solution in place will have operationally inefficient processes for the following:

Organizations have attempted to solve the SSH key challenge in-house.  But they are often surprised with the complexity of the problem, since there's no central governance over the keys and their numbers are often measured with hundreds of thousands. They often simply give up.

This is where specialized software like our Universal SSH Key Manager steps in. It discovers even the hardest-to-find SSH keys from massive enterprise encryption key estates and centralizes their management without requiring changes to the key architecture.

In short, does the heavy lifting for the customer and it puts them in charge of their critical but often forgotten credentials.

This is one of the reasons why many Fortune 500 have chosen to collaborate with us to solve the key problem, even when they have other security solutions like Privileged Access Management (PAM) in house. PAMs alone simply cannot manage keys at enterprise level, often covering only 20% of all case - in the best case scenario.

We see the future of SSH access following Zero Trust principles. It's a paradigm shift where you no longer attempt to manage static SSH encryption keys but instead migrate to just in time (JIT) certificate-based authentication.

This is a huge evolutionary step for Enterprise Key Management. We call it SSH Zero Trust access that has the following benefits:

But Zero Trust proof UKM takes the game to the next level. It radically reduces the complexity and management overhead in SSH key-based authentication. With UKM Zero Trust, organisations migrate from managing thousands of key to a future-proof Zero Trust SSH access without keys - at their own pace. 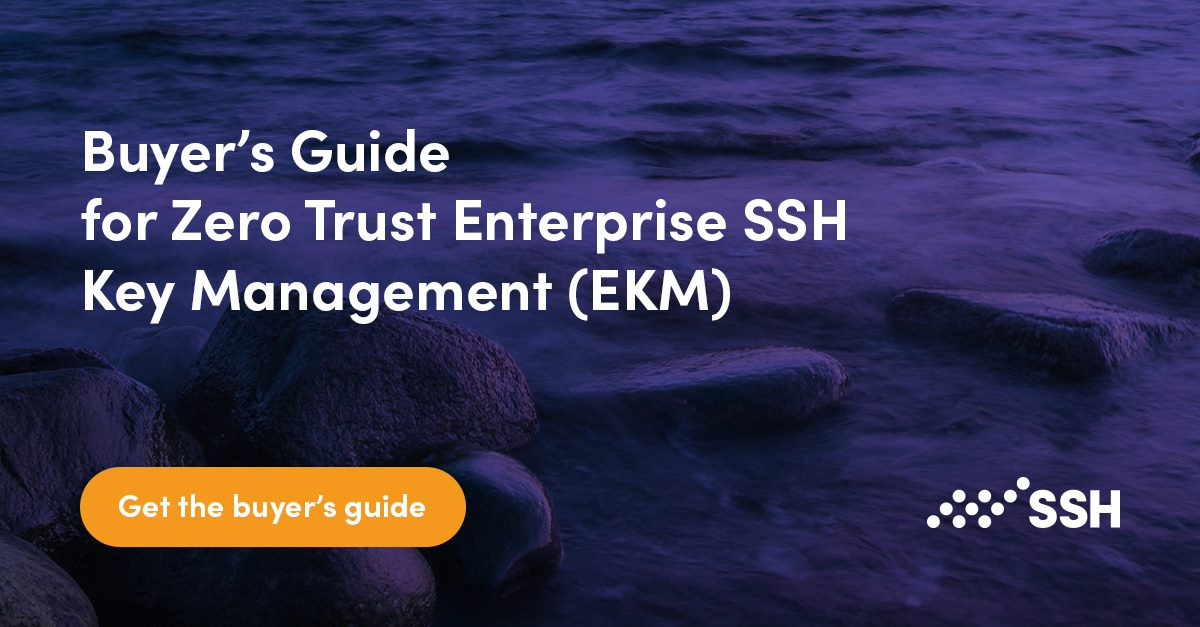 Marieta Uitto is a product manager currently focusing on driving roadmap and collaboration with customers to successfully solve their challenges. She has spent over 15 years with SSH.com of which more than ten, working in R&D with exceptional teams to deliver industry leading products.  PAM solutions, Key Management...